GOAL
I was in my 30s before my dreams to become a writer were actualized, but I started writing almost daily when I was nine- years old. Why was that? I would always wonder. It was because I didn't know how to become a writer. In school, I was steered toward becoming a teacher, nurse, secretary or housewife, neither of which interested me at the time. If I'd had a #TeenWritersProject to show me how and tell me what and guide me where, it would not have taken me so long to live in my purpose as a creative.

As an adult writer with a thriving career, I became fueled by a spark to kick-start the writing careers of as many teens as I could. I vowed that if I can help it, no other teen would want to pursue their dream as a writer but not have the resources to know, not only how to get started, but how to thrive in a career as a full-time literary artist. So, I created the #TeenWritersProject with the primary goal in mind to help teens channel their vulnerabilities so that they can tell real stories that matter to them, their world and the entire world.

Soon after, our secondary goal became to establish an innovative literary community for teens to consistently evolve and improve their quality of life and experiences through writing. We want to boost the writing skills in teens in an engaging and fun, interactive way so that they can improve their reading fluency and comprehension, critical thinking, creative intuition and cultural experiences. We provide the platform. Teens provide the stories!
THE HASHTAG 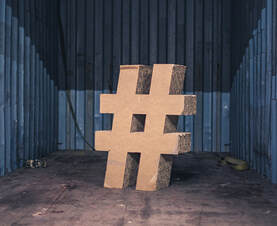 Teens are a dope group of people! They have the ability to become student activists after tragedy and organize historic rallies against gun violence that drew tens of thousands of people, or register more than 50,000 people to vote like 18 to 19-year olds, Emma González, Jaclyn Corin and David Hogg did. In an effort to get more teens to read, they can, like Marley Dias did on her own, distribute more than 11,000 books to libraries, schools and community organizations around the world. Or, they can develop a software tool that is potentially life-saving in the world of medicine like Rishab Jain did at 14.

I'm a firm believer in meeting teens where they are, and social media is where they are. So, by using language, codes and images that teens relate to, we can both attract more teens to the cause and increase the number of supporters who can expand the conversation. To support these teens and others like them, it is our adult obligation to start and trend conversations about why many teens do not like to write or read, and then initiate solutions for a change. #teenwritersproject #twp #teenwriters #teenstorytellers
JOIN THE MOVEMENT!
#TeenWritersProject is a nonprofit 501(c) organization committed to making writing accessible, engaging and fun for teens, especially those in vulnerable populations, by establishing a collaborative and engaging space for them to write.